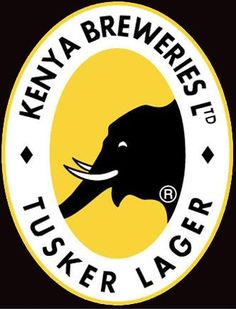 This is the second global beer on our Beer Advent calendar this year.  Just as last weeks beer (Grolsch) was the lager of the Dutch, so this one is the lager of Kenya.  Kenya Breweries (now East African Breweries Ltd.) has been brewing beer in Kenya since the 1920’s.  The name “Tusker” came about as a memoriam following the death of George Hurst, a co-founder of Kenya Breweries, who was killed by an elephant during a hunting expedition in 1922. The brand has since grown to be East Africa Breweries Ltd’s flagship brand.  Tusker is brewed from 100% African ingredients that are all locally sourced!!!  The barley is from the Savannah and the Maasai Mara (southwest Kenya). The spring water is from the Aberdare Mountains (central Kenya) and all the yeast is developed locally; which means that you feel closely connected to the brand’s origins and roots….The beer’s slogan “Bia yangu, Nchi yangu” means “My beer, My country” in Swahili.

Tonight’s beer is especially intriguing to me because of the 3  1/2 years that my wife and I spent in the country of Uganda.  Even though Tusker is a Kenyan beer, it was everywhere in Uganda.  Many Ugandans enjoyed a Tusker or a Nile Special (Ugandan beer) while watching a Premier League football match….featuring either Manchester United, Arsenal, or Liverpool.  Community was the number 1 value in East African culture.  No matter where you went, you would find community.  Even as you were going, you would find community (hence the reason you will never see a lone person in a vehicle or even on a bike!)  Community is just a way of life in East Africa.  A value that I think is virtually non-existent in our American/western world.  I miss my friends in Uganda.  I miss my community in Uganda.

Cheers to community and to drinking the beer of our Kenyan brothers and sisters!

57 Now the time came for Elizabeth to give birth, and she bore a son.
58 And her neighbors and relatives heard that the Lord had shown great mercy to her, and they rejoiced with her.
59 And on the eighth day they came to circumcise the child. And they would have called him Zechariah after his father,
60 but his mother answered, “No; he shall be called John.”
61 And they said to her, “None of your relatives is called by this name.”
62 And they made signs to his father, inquiring what he wanted him to be called.
63 And he asked for a writing tablet and wrote, “His name is John.” And they all wondered.
64 And immediately his mouth was opened and his tongue loosed, and he spoke, blessing God.
65 And fear came on all their neighbors. And all these things were talked about through all the hill country of Judea,
66 and all who heard them laid them up in their hearts, saying, “What then will this child be?” For the hand of the Lord was with him.
(Luk 1:57-66 ESV)