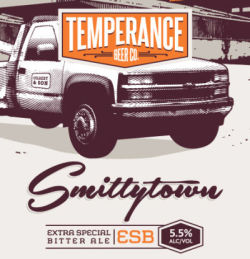 ESB stands for “extra special bitter.” It is a style that is not easily found these days as the IPA’s and Pale Ales loaded with hops seem to be taking over.  ESB’s (otherwise known as English Pale Ales) are known for its balance and the interplay between malt and hop bitterness. ESB’s display earthy, herbal English-variety hop character and a fruitiness to their aromatics and flavor. Even though ‘bitter’ is in the name, don’t let it fool you…there is NOT a noticeable bitterness to it, especially compared to some of the other beers we’ve had thus far.

Cheers to making life better in ways big and small!

46 And Mary said, “My soul magnifies the Lord,
47 and my spirit rejoices in God my Savior,
48 for he has looked on the humble estate of his servant. For behold, from now on all generations will call me blessed;
49 for he who is mighty has done great things for me, and holy is his name.
50 And his mercy is for those who fear him from generation to generation.
51 He has shown strength with his arm; he has scattered the proud in the thoughts of their hearts;
52 he has brought down the mighty from their thrones and exalted those of humble estate;
53 he has filled the hungry with good things, and the rich he has sent away empty.
54 He has helped his servant Israel, in remembrance of his mercy,
55 as he spoke to our fathers, to Abraham and to his offspring forever.”
56 And Mary remained with her about three months and returned to her home.
(Luk 1:46-56 ESV)